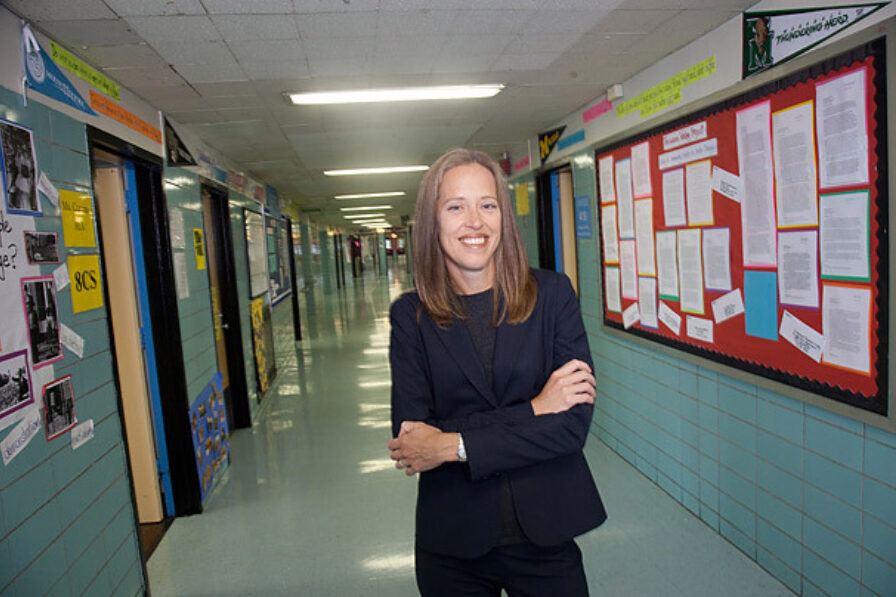 Rethinking the very purpose of education, with Teach For All CEO Wendy Kopp

Wendy Kopp is the founder and CEO of Teach For All, is the author of two books, holds honorary doctorates from 15 universities, and has been named among Time Magazine's 100 Most Influential People. Ako Mātātupu is a proud locally-led member of the Teach For All network. Wendy recently sat down with Kathryn Ryan on RNZ's Nine to Noon Programme to share some of the issues and insights that guide and motivate us:

Wendy Kopp on Teach For All: We’re a global network of independent, locally-led organisations in now 61 countries around the world that are all united by a common purpose, which is to develop collective leadership to ensure all children fulfil their potential. Each network partner adapts a unifying approach, which consists of enlisting promising leaders of very diverse backgrounds, including many who themselves have experienced the very inequities we are working to address.

Wendy on the theory of change: Ako Mātātupu has developed partnerships in numerous school communities. Those schools hire the teachers Ako Mātātupu recruits and develops, and then they invest a lot in their coaching. Those teachers are working in partnership with students and parents and caregivers and the other educators in the school communities in pursuit of working to ensure the students they reach have all the opportunities they deserve. The ultimate idea is that those teachers see firsthand the potential of students who are quite marginalised, and they see the challenges of the system itself, and work in collaboration and partnership with seasoned educators and others in communities to ultimately affect the systemic changes necessary to ensure that all kids do have the chance to fulfil their potential.

On the initial two-year commitment that participants make to serve school students in a lower income community: the initial commitment is important for the immediate outcomes for students growing up today, and also because those two years are foundational for a life of leadership and service in pursuit of the systemic changes that we ultimately need to see.

Wendy on authenticity over saviourism: Our teachers come from all different backgrounds, all different career interests. They come in committing a minimum of two years to teach, but what we’ve seen all over the world is that they never leave the work. What we’ve seen is that they commit to this, and that they come to believe all the more fully in the potential of kids and families - and educators in general - to make a difference. And what we’ve seen is that globally more than 70% stay long-term in education itself, and many others stay involved in addressing the broader set of issues, whether they be in public health or at the policy level. And we’ve seen much the same thing, if not a greater commitment to education, in New Zealand participants.

On Teach For All's student-centred collective leadership: All kids have potential! We need to create an equitable system, and we know that will take a lot of change within education but also a lot of change outside of education. If you think about what drives systems change we know it is collective leadership - we need people at every level exerting leadership, and enough change agents working around the whole ecosystem around kids, taking on the issues in their full complexity. As we’ve progressed and learned more about the complexities of the world, we’ve learned that catching kids up in a system that was built so many decades ago won’t be sufficient, so we’ve gathered around our network with a commitment to rethinking the very purpose of education. We’re working for an equitable system but also for a system that really develops all of its students as leaders that can shape a better future for themselves and for all of us.

On pedagogy and practicing excellence: We come at this work with deep respect for the knowledge, skills, and mindsets involved in strong teaching. I think we have a huge asset because we work with our teachers throughout those first two years - starting in a pre-service environment but then we also have the luxury, because of the structure of our approach, to provide two years of ongoing coaching and development. If you look at the research on teacher development it would in fact substantiate that approach, to say that so much of this is contextual. It’s the interaction between a particular teacher’s strengths and developmental areas, and the particular challenges in their classrooms and schools - so the fact that we can provide a two year intensive, ongoing, coherent programme that’s rooted in what we’ve learned about what differentiates the successful teachers in the particular environments in which we’re working - I think it’s just the strength of this approach.

Wendy Kopp on solidarity: The biggest learning for me over the last fourteen years since launching Teach For All is that the roots of the issues we’re addressing are eerily similar from place to place - meaning that the circumstances faced by the most marginalised kids around the world are probably more similar to each other, from place to place, than they are to the more privileged kids in their own countries. And what that means is that the solutions are much more shareable than we’ve assumed in education. Everything needs to be adapted from place to place, but what we’ve realised is that if we could figure out how to spread the insights, the principles that undergird success that we do see in so many places around the world, we could really speed up progress. As different as things may seem on the surface, ultimately the undergirding roots of the inequities we’re addressing are very similar.

Find out more about Teach For All or consider joining the locally-led Teach First NZ Programme.

Trust as foundation for the learning relationship, with Kairapu Mitchell Clark